I have a comic strip published in the new issue of the comic book Sci-fi anthology FutureQuake. The story is called Social Engagement eXperiment and was illustrated by Will Pickering. I am the scriptwriter for the story.
I wrote this several years ago and pitched it to 2000AD at the Birmingham International Comics Show in 2008. They were interested but never took it. After several re-writes I sent the script to FutureQuake press. I am a big fan of their comics and thought they might like the story.
Another few re-writes later, they accepted the script, where they paired me up with Will Pickering who done an excellent job in illustrating the story.
I’m so excited about seeing this in print as it was a long slog to finally getting it published. I am also a huge fan of FutureQuake, so it is great to see my work in there next to other fantastic writers and artists. Hopefully this will be a spring board to kick start my comic book writing. 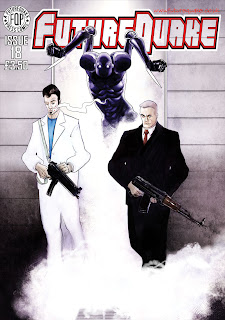